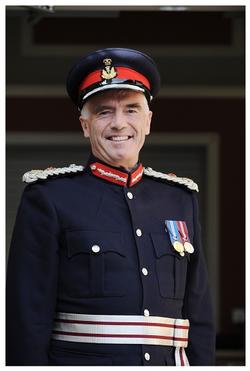 The Lord-Lieutenant of Fife is Mr Robert Balfour who was appointed in December 2014.

The Lord-Lieutenant is appointed by The British Monarch on the recommendation of the First Minister, and on the advice of the Prime Minister.

Within the cities of Aberdeen, Dundee, Edinburgh and Glasgow, the Lord Provost is the Lord-Lieutenant.

Lord-Lieutenants are not paid and only receive expenses such as travel costs incurred on official duties.

The Lord-Lieutenant is expected to:

As His Majesty’s representative, the Lord-Lieutenant does not take part in political activities.

In particular, the Lord-Lieutenant:

As His Majesty’s representative, the Lord-Lieutenant takes precedence over other dignitaries attending events including Ministers of the Crown and Conveners/Provosts of Councils.

The Lord-Lieutenant and the deputies provide advice and help with:

If you would like help with any of the above, please contact the office using the details below.

Each year the Lord-Lieutenant also appoints young Cadets who support him at events throughout the year.

Was this page helpful?