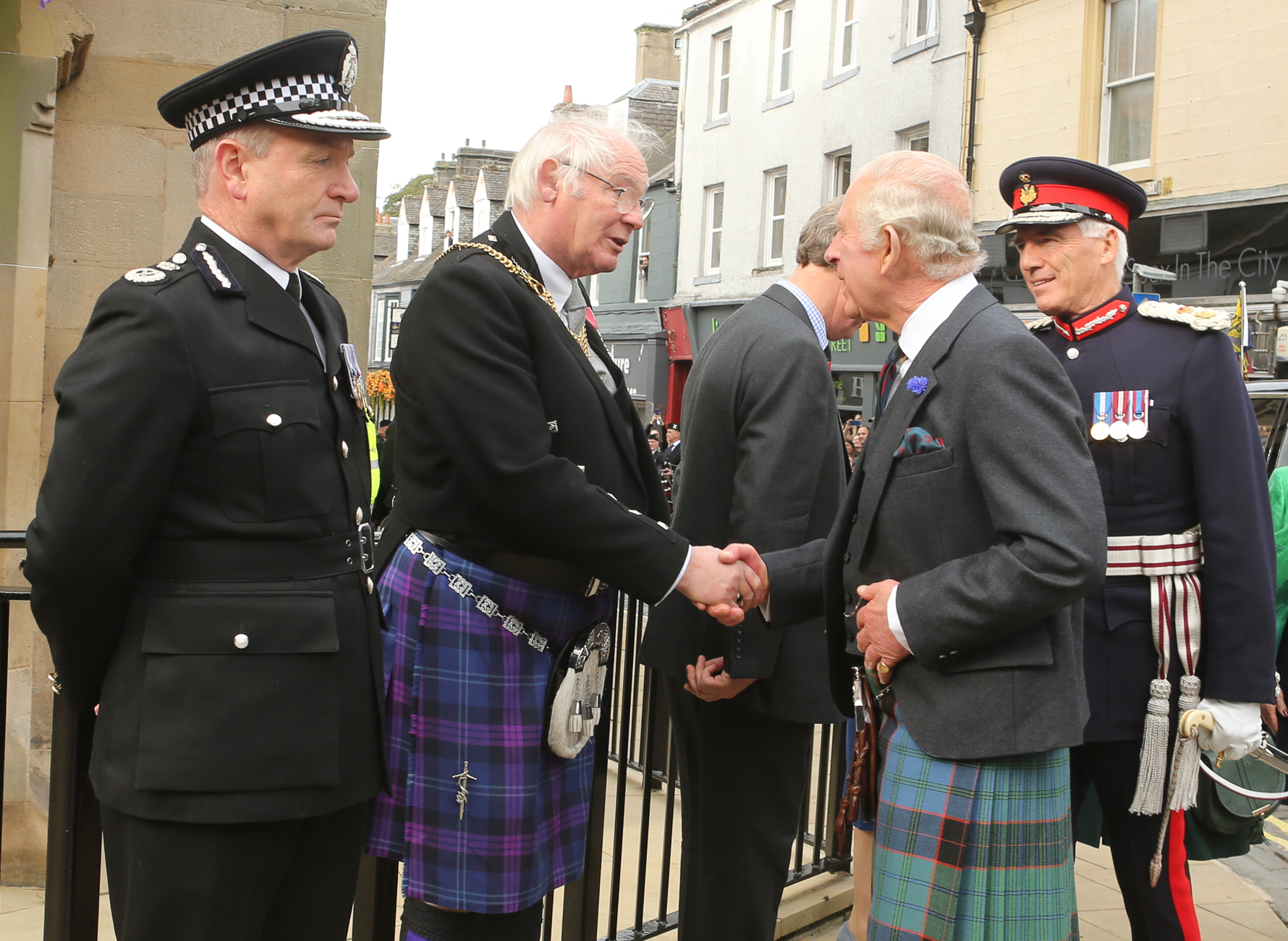 The (now official) City of Dunfermline welcomed Their Majesties The King and The Queen Consort to the City Chambers today for an official ceremony to hand over the Letters Patent, confirming the new city status.

Dunfermline is now the newest city in Scotland, despite its ancient history, having been granted City status as part of Queen Elizabeth II’s diamond jubilee celebrations.

At a short ceremony inside the City Chambers, King Charles officially presented the official documents to Provost of Fife, Cllr. Jim Leishman, in front of an audience of invited guests, which included First Minister Nicola Sturgeon and Secretary of State Alister Jack.

Provost Leishman said he was so proud for the people of Dunfermline to receive this status for the town, which will always hold a special place in his heart.

“Although I’m not a native, Dunfermline is my second home having spent most of my career playing and managing Dunfermline Athletic Football Club. So, to be able to welcome our new King here so early in his reign is a real honour. Having the title of city will be a huge boost for Dunfermline opening up more economic growth, investment and truly putting the city on the map for tourists.

"It was great to see so many people turned out to cheer, wave  and welcome the new King to our new City. "

“Dunfermline has had a very strong association with the monarchy for many centuries. That is why it is so fitting that Their Majesties the King and Queen Consort were here to mark such a significant milestone for the community at the beginning of this new era.

“The granting of city status will help Dunfermline – a place with an extraordinary history – as it looks to create a more prosperous future. I want to express my huge thanks to everyone who has played their part in supporting Dunfermline’s successful application over many years.”

“Being awarded city status represents a very special moment for Dunfermline and its community.

“It is particularly poignant, and a true honour, that Their Majesties King Charles III and the Queen Consort were present at the event, marking their first official engagement since the end of formal Royal mourning.

“This Royal ceremony heralds an exciting new chapter in Dunfermline’s history, and I was delighted to attend and celebrate this wonderful city’s rich heritage and promising future.”

The Royal couple were welcomed by pipers and then entertained inside the Chambers by the Dunfermline Junior Choir, led by Mandy Miller. The blessing was performed by the Right Reverend Dr Iain Greenshields, Moderator of the Assembly for the Church of Scotland.

Rt Rev Dr Iain Greenshields, Moderator of the General Assembly of the Church of Scotland and minister of St Margaret’s Community Church in Dunfermline, delivered a blessing at the ceremony. He commented:

“We are indebted to her late Majesty Queen Elizabeth for conferring, as part of her Jubilee Celebrations, city status on Dunfermline – the Auld Grey Toon.

“A Toon no longer.

“It is a privilege that this ancient capital of Scotland has been honoured in this way and it was a joy for us to gather with His Majesty King Charles to celebrate this significant moment in the history of Dunfermline.

“May this be a place where justice is loved, unity experienced and all people feel valued, cared for and respected.”

The King and Queen Consort then left to visit Dunfermline Abbey where they were greeted by the Rev Mary Ann Rennie, the Abbey’s Minister, then given a short tour by representatives from Historic Environment Scotland.

Crowds lined the streets between the Chambers and the Abbey keen to get a view or shake the hand of the Royals.

Invited representatives from a large and diverse number of community groups and clubs also had a chance to chat to The King and Queen Consort inside the 950 year old abbey, before they left for their next engagement.